The following is a guest post from Jimmy, who destroyed the rest of us the the Wolves Rubes NCAA Tournament Challenge.  Congratulations Jimmy!  Check out his Vikings blog HERE.  You can also follow Jimmy on Twitter @submissioncp3.

Greetings WolvesRubes readers. I'd like to thank WolvesRubes for the opportunity to express a bit of my views on the current turmoil that is our Minnesota Timberwolves. Now we have ten games left. Three of which are against current sub-.500 teams, 4 games against bubble teams, with OKC, LAC and Indiana rounding out the top. So what does this all mean? That we need to beat those four bubble teams so that Utah can eek their way into the playoffs.

'What am I talking about?' you may be asking yourselves. The wolves are five games out with ten to play. The odds of making the playoffs the way we've been playing is abysmal. So what about the Jazz? You're a Wolves fan, why should you care if the Jazz make the playoffs? Well I'm here to inform that we are currently without a first round pick for the upcoming draft. A draft that was very appealing at the start of the season with so many kids staying for another year of college (Barnes, Sullinger, T-Jones) and now isn't as appealing as it was speculating all the guys staying and the one and dones this year. The point being that we don't have a 1st round pick as it was traded back in 2005 when we got Sam Cassell from the Clippers, but we could have one.

When we traded Al Jefferson to the Jazz we got Kosta Koufos and a first round draft pick. It was top-16 protected last year and this year is Top-14 protected. So as long as the Jazz make the playoffs we get their first round. Got it?

Also this tid-bit of information came across my desk last night. The Wolves haven't won a game in April since April 8th, 2009 when we defeated the Golden State Warriors 105-97. We have a few more opportunities with the shortened season going deeper into April.

Speaking of the shortened season and one last thought. I have enjoyed immensely the turn around the Wolves have made. The playoffs would have been nice but winning more games than we had last season with 16 less games is awesome.

If you're a Vikings fan you can check out my Vikings blog mybloodrunspurple.blogspot.com. Again I'd like to thank WolvesRubes for the time and the plug and you kind readers for milling over my thoughts. I'm sure you'll find yourself cheering for Al Jefferson once again (at least for a short time.)

Since that Friday night against the Lakers, nearly 2 weeks ago now, the Wolves have lost 5 out of their last 7 games.  I tried to talk myself into thinking that we would be ok with the chemistry that has been built here, Barea on his way back from injury, and Ridnour actually playing fairly well at the time.  In what seems like an instant, Minnesota has gone from having sole possession of the #8 spot in the West, to 2.5 back and 3 teams in their way to get back to that point - in less than two weeks.  In fact, their only 2 wins during the post-Rubio era have been against a team that is tanking this season to preserve their 1st round draft pick (Warriors), and a hot Suns team which we just outscored shooting 14-22 from 3 point range.

As expected, the lack of overall energy on both ends of the floor has been the most noticeable difference from then and now.  What I think has been a little surprising has been the Wolves complete inability to defend effectively without Ricky around any more.  I expected moving Ridnour back from the 2 to the 1, sliding Webster into the lineup would actually improve the defense.  These last 7 games, the Wolves have given up 107.2 points per game.  In the 41 games previous, the Wolves gave up an average of 96.5 points per game.  Before Rubio got hurt, only 5 times did the T'Wolves even give up more than 107 points in 41 games.

The part about Rubio's game that I love the most probably cannot be tallied by any statistic.  He brings effort, competitiveness, leadership, emotion, and this feeling that the team has a chance every night when he is on the floor.  Sure, he's effectively flashy, but who knew how much of a defensive impact he has.  Maybe this even stems from the confidence that he instills in the team on both ends of the floor, I don't know.  Ricky Rubio may never shoot like Chris Paul, explode to the rim like Derrick Rose, or shut down an opposing point guard like Russell Westbrook.  The truth is, however, that this team is completely different without Ricky Rubio.  Offensively, he keeps everything in motion; defensively, his impact is beginning to show now that he's not around anymore.

I miss Ricky.  Only 8 of the last 18 games are against teams not currently in a playoff spot.  We have 9 at home, 9 on the road.  I wish I could say that there is a comeback ready to protrude from this team, but it's looking pretty meek at this time without our favorite point guard.  I never want to throw in the towel too early, but I really miss Ricky.

Over at Canis Hoopus, they referenced a couple more recent trade rumors that are being talked about this afternoon.  One would involve a Michael Beasley/Jason Richardson swap with Orlando, and the other involving CJ Miles from Utah.  One of the options involving CJ Miles is a three team deal where the Wolves would give up Ellington and possible draft picks, and receive Miles and Jamaal Tinsley in return.

As we draw nearer to the NBA trade deadline 2 days from now, more and more rumors are flying around involving Dwight Howard, Rajon Rondo, Ray Allen, Jamal Crawford, Michael Beasley, Pau Gasol, and just about every other player in the league it seems like.  At this point I get the feeling more and more that Minnesota is going to stand pat this week with the roster they have.  Unless they are overwhelmed by an offer for Beasley or Williams, I just don't see Kahn parting with either one of those guys with the team in this position in the Western Conference standings.  The return from a trade by the Wolves would probably be in the form of draft picks, and I would be surprised if the chemistry on this team is disrupted this week - even with the loss of Ricky Rubio.  Looking further ahead beyond this season and into the off-season, however, my eyes are set on one player: Eric Gordon.

As it stands this very moment, the Minnesota Timberwolves are still only 1 game behind Houston for the #8 spot in the West, a game and a half behind Dallas at #7, and only 2 games back from Denver at #6.  On the flip side, Portland, Phoenix, and Utah are all within a game of Minnesota, with Golden State only 2 behind.  In a shortened season, literally every single game is going to make a significant difference in the chase for that playoff spot which seemed to slip a little from the grasp of the Wolves on Friday night with 16 seconds left.  Only 4 games now separate #6 through #14 in the West with a little over 1/3 of the season to go.  Without Ricky Rubio's presence these final few weeks, I wondered if it's even worth it to consider a playoff run at this point, especially after the performance on Saturday night against the Hornets.

What a rough weekend for the Timberwolves.  Rubio's done, we're back in 9th place, and we just lost to the New Orleans Hornets.  Luckily, the brackets were set last night for the NCAA Tournament.  Here at Wolves Rubes we want to have a little contest.  We've created a group through Yahoo Fantasy Sports where you can fill out a bracket for this year's tourney.  If you get the most picks correct out of 63 possible (play-in games aren't included), you get to write a guest post on this blog.  Or, if you want a better prize than the fame and fortune of writing for us, please leave your ideas in the comment section and they will be considered! 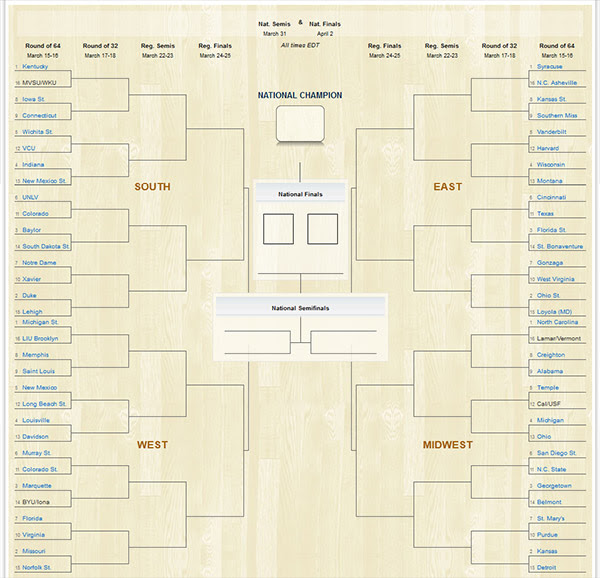 This past Tuesday, March 6th, marked my fifth anniversary.  Nope, not my wedding anniversary - that's not for a few more weeks.  Tuesday was the 5 year anniversary of the last time I saw my favorite basketball team beat the LA Lakers.  That night at Target Center, Ricky Davis was 2 assists shy of a triple-double (33 points, 10 rebounds, 8 assists), KG poured in 26 and 17, Rashad McCants played 22 minutes off the bench, and Marko Jaric and Mark Blount started at the 2 and 5 respectively.  Kobe had his usual performance against the Wolves, scoring 40 points, 13 boards, and 8 assists.  Even Smush Parker scored 24 that night, but it wasn't enough as the Timberwolves outscored the Lakers 12-2 in the 2nd overtime to win 117-107.  It's been 17 straight Laker victories since that night.

Per Star Tribune Timberwolves writer Jerry Zgoda, JJ Barea will have some time off here this weekend to allow his left ankle to heal.  Pekovic will be back, thankfully, to help with the twin towers from LAL.  Also, Malcolm Lee will be on the bench on Friday night in case of foul trouble at either guard spot.  I've really been looking forward to Lee making his NBA debut, if nothing else, because he's something different that's already paid for.  I really don't know much about him, though, aside from his UCLA background.  So, who is Malcolm Lee? 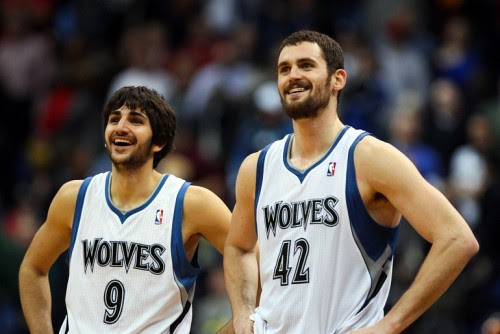 Jamal Crawford... No thanks

I heard today that the Timberwolves are making a run at acquiring Portland guard Jamal Crawford - probasketballtalk.com has more here. Oh and what do you know? We get a firsthand look at Crawford tonight. Although with all due respect to Crawford, a pro basketball player who hits jump shots at clutch times in front of thousands of opposing fans, he's not playing very well tonight. 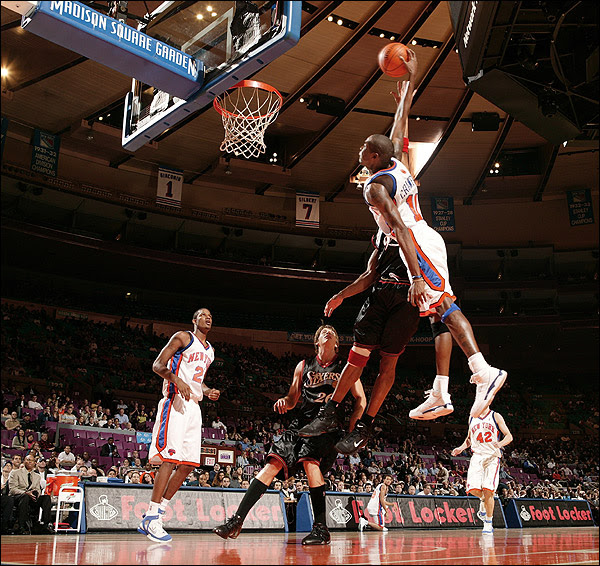